2012 was another successful year for BSC, with good fleet sizes and most competive racing. In addition we took deliverly of six Pacers for our Training Centre fleet, which have proved very popular. 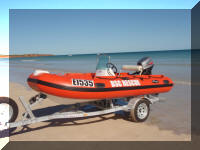 After much fund raising through Raffles, grants and sponsorship, BSC's new RIB Rescue Boat (a Rapid 370) arrived in April in time for the first race of the season.

In this sailing year BSC set up as a Yachting Australia Training Centre (aka YATC) with Sarah Liddiard as Principle. This has encouraged a resurgence in memberships with (only part way through the season) 25 adult and 6 junior/youth members, with an additional 6 non-member adults taking part in training.

During the 2010 Sailing Season BSC found it exceedingly difficult to get members and the membership went down to a very disappointing 13 adult and 2 junior/youth members.

During the 2009 Sailing Season BSC had 18 adult and 21 junior/youth members. 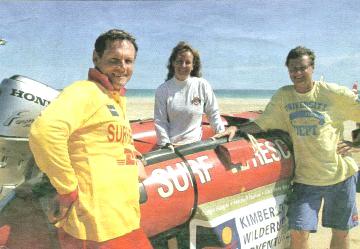 A NEW rescue boat donated to the Broome Sailing Club saw active duty for the first time last weekend patrolling the waters at the c1ub’s family fun day and giving the occasional joyride.

The rescue boat was donated by the Broome Surf Club last week­end and will provide the Sailing Club with their first rescue boat. Commodore Sandy Ogg said the Sailing Club was grateful for the gift. “We haven’t had a rescue boat before and the surf club very kindly donated us one,” she said. She also thanked regional man­ager for APT Kimberley Wilderness Adventures Phil Cox, who donated funding for an engine and safety equipment for the boat.

Broome Surf Club patrol captain Ric Cockman said his club supported the idea of mutual cooperation with local clubs. “Instead of selling the boat for funding we decided to give it up to help a new club starting up,” he said. “The idea is it is nice when club’s work together to support each other. It is a struggle out there to do it on your own,” Cockman said.

Sailing Club secretary John Kennedy will man the rescue boat, putting his skills from the Broome Volunteer Rescue Group to use. Commodore Ogg said the sailing club had grown hugely in its second year and was expecting to have 15-20 boats this season. Races get underway May 4

During the 2008 Sailing Season BSC had 22 adult and 14 junior/youth members.

Sailing Comes back to Broome - March 2007

At the 2007, inaugural, AGM a Committee was formed with the following make-up:

In the lead up to AGM and the sailing season a whole bunch of active and committed sailors under the effective leadership of Justin Bellanger got together to reintroduce club sailing to Broome.  This was their publicity release for The Broome Advertiser:

The club also held an inaugural Regatta this year, with the following report in the Broome Advertiser;

During the 2007 Sailing Season BSC had 28 adult and 22 junior/youth members.

However, there has been a sailing club before in Broome: 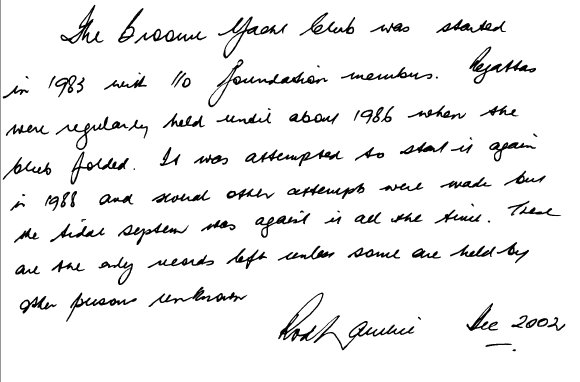 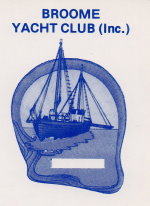 To get an idea of the type of activities that were going on at the time, click here to view the Minutes of the December 1994 Annual General Meeting.

After many trials and tribulations, by 2002 the organisers finally gave up trying to sustain Broome Yacht Club, and all the club funds (the princely sum of $27,670.38) were transferred to Broome Volunteer Sea Rescue Group to significantly aid in the purchase of a new rescue boat for that group.